There was crying in Granada when the sun was going down
Some calling on the Trinity, some calling on Mahoun;
Here passed away the Koran – therein, the cross was borne
And here was heard the Christian bell, and there, the Moorish horn.

Te Deum laudamus! was up the Alcala sung
Down from the Alhambra’s minarets were all the crescents flung
The arms thereon of Aragon, they with Castile’s display;
One king comes in in triumph, one, weeping, goes away.

– John Gibson Lockhart, The Flight From Granada (translation from an old Moorish ballad)

So goes Catalina, a young infanta of Spain, who is recounting the events of her parent’s triumph to her new husband, an enraptured Arthur, Prince of Wales. They are in a drafty castle in Ludlow in the dead of winter, and Arthur has requested that she tell him a story.

It’s one of many dreamy, arresting passages in The Constant Princess, Philippa Gregory’s fictional re-imagining of the early life of Katherine of Aragon – as Catalina would eventually come to be known – the first and most accomplished of all the six wives of Henry VIII. The fall of Granada is a story worth telling, made all the more dramatic because it’s true. In the last days of the Spanish Reconquista, the Catholic monarchs Isabella of Castile and Ferdinand of Aragon pushed out the last of the ruling Moors in the south of Spain, unifying the entire peninsula and establishing Granada as the seat of their power, taking up residence in the great citadel of the Alhambra. The palaces within the fortress of the Alhambra is where Catalina spent her childhood, and the book became the main inspiration for this trip, so much so that I brought it with me!

Have you ever had a fleeting dream, where you think to yourself that someday, given the chance, you’ll go and do something, or see something, or accomplish something, all the while telling yourself  it’s probably never going to happen? The Alhambra was one of those dreams for me. At the time I didn’t quite know how that dream could possibly come true, if it ever even would, and so I tucked it away and out of sight like we do so many of our private aspirations.

Walking up the road on the hill that leads to the citadel (I would’ve bused, but something was going down with Granada’s buses that morning, and I really really couldn’t afford to be late – they only let you visit the Nasrid Palaces within the complex at a particular time), each time I paused for a minute to try and catch my breath – it is a very high hill – I felt like pinching myself, because it almost didn’t feel real. I was finally, finally going to see a place I had only read about, a place that lived in my imagination, filtered through the lens of a Philippa Gregory novel. Was it real? Was it going to be as gorgeous as Catalina had described? Or would I be disappointed? Would it turn out to be less than what my fevered brain had conjured?

It’s forbidding, isn’t it? The Gate of the Pomegranates is a high stone gateway  that looms over the original road into the fortress (it now has about two other access points), invoking visions of horses clattering through its arches, medieval knights astride, pennants blowing proudly in the breeze. The sound of water begins almost immediately, two streams flow on either side of the path, and the air is fresh and clean, the sunlight filtered by the leaves of the many trees within the complex, all leading up to the Door of Justice, the original entrance to the Alhambra.

In retrospect, it was a good thing busing didn’t work out, because getting into the Alhambra by the Door of Justice is the fastest way to skip the queue (do not do this if you do not have a pre-purchased ticket with a QR code).  The road starts at the foot of the hill, at the Plaza de Santa Ana.  A bus would’ve taken me to the new, contemporary entrance, and I would’ve missed the walk through a picturesque, tree-lined pathway.

The pomegranate is the heraldic symbol of Granada, and the origin of its name (Spanish: granita).  It symbolizes many things, chief of them prosperity and fertility. When Catalina went to England, she adopted the pomegranate as her symbol too. It’s a fitting symbol for the Alhambra as well. Alhambra means “the red one”, and like the fruit, it is red on the outside and deceivingly plain. Crack a pomegranate open and a wealth of jewel-like seeds is revealed; similarly, enter the Alhambra and a priceless work of art reveals itself to the eye. 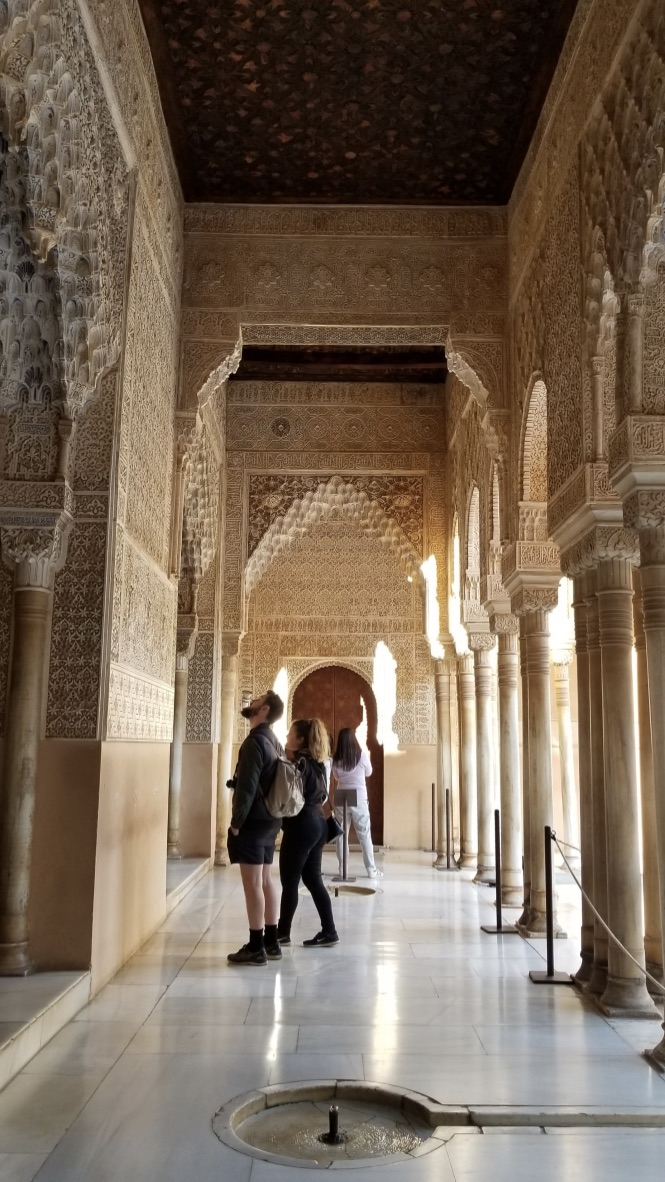 Nowhere is this beauty more prevalent than in the Nasrid Palaces, the residential part of the complex, where the Sultans and Sultanas of the Nasrid Dynasty lived.

The palace is absolutely breathtaking, made even more so because all of its interior is made by hand. Carved and shaped by master masons of the era, lines of Arabic inscriptions decorate walls of stucco, interspersed with flowers and botanical motifs.  Water plays a large role in the palace. There are fountains and reflecting pools all throughout and the sound of running water is like music in the background. Trees heavy with oranges and pomegranates abound, and I really really wish the photos I took could do justice to it all, because they don’t come close to showing how stunning the palace is at all. 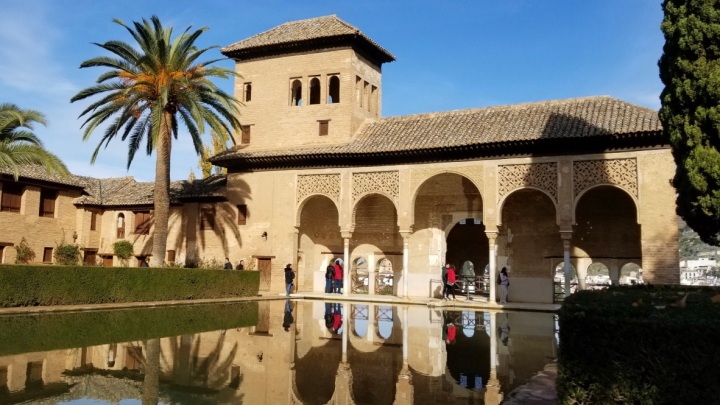 The Moors added to the complex as they went, and the summer palace of the Generalife (pr. He-ne-ra-‘li-fe) was one such addition. It was where they went to escape the heat during the hot summers, and is a pleasure garden that in its own way is as breathtaking as the Nasrid palace.  There is the same intricate plasterwork, although not at the same dizzying scale, and reflecting pools and fountains abound. It’s easy to forget your cares in the Generalife, and who could blame you?

When Boabdil, the last Muslim ruler in Spain, left the Alhambra for the last time after surrendering it to Isabella of Castile and Ferdinand of Aragon, he wept. His mother, who was with him at the time, was said to say “You weep like a woman for what you could not defend as a man.” Imagine his pain (and her rage) at being forced to leave a home designed to be utter paradise on earth.

For myself, I didn’t quite weep when I left it, but I understood the urge to. I did sigh, happy to have enjoyed it for a day (you can easily spend the better part of a day there – I didn’t even include photos of the Alcazaba and the palace of Charles V), and regret at having to leave. Then I began the walk downhill, back to the city centre, pausing every now and then – it is a very steep incline, and if the walk up is hell on your thighs, the walk down is hell on your knees!