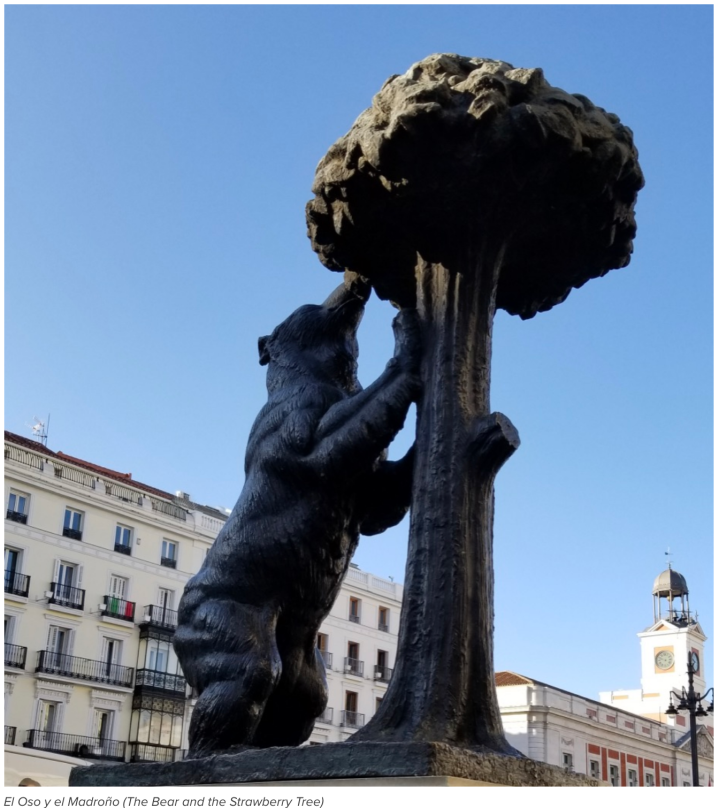 “A strawberry tree? Preposterous!” I thought, having never heard of one before. The strawberries I am familiar with grow on vines in cool climates, hugging the mountaintops of Baguio City. So when I learned that Madrid’s coat of arms features a bear rearing up to prise strawberries off a tree, I was intrigued.

Other than the name, it turns out the strawberry tree and the common strawberry as we know it are completely unrelated. Part of the evergreen family, the strawberry tree is found in the Mediterranean and parts of Western Europe and is favoured by bears and other animals for its fragrant and luscious fruit, which look like spiky little lychees. One particularly interesting tidbit is, if left to ripen on the branch, its fruits start to ferment. This can result in some very drunk bears, which is apt because it is entirely possible (and ridiculously easy) for a person to get drunk in Madrid, and not just on alcohol.

Like meticulously aged rum, Madrid is intoxicating. It’s old, a Miss Havisham kind of old, an aging but elegant aunt draped in all her finery, surrounded by art and the mementoes of the past, smelling of cigarettes*, helpless against the slow march of time, yet glorious despite its slow decay.

And it’s grand. Boy, is it grand. It’s a sprawling city filled with ostentatious town plazas, wide avenidas,large rotundas and sprawling parks and gardens; with daunting castles and baroque aristocratic homes that reflect the power and pride of the Habsburg – and, later, the Bourbon – dynasty, and the elevation of Spain in its prime.

It was, of course, virtually impossible for me to cover all of Madrid in two days, which is all the time I had allotted for this most grand of cities. So I did what I could, focusing on the Centro district, which houses the older parts of the city. Although Madrid is now very much a modern city, with infrastructure befitting the nation’s capital and the centre of Spanish commerce, a very impressive number of its historical neighbourhoods and landmarks still remain for us to appreciate.

Can you say you’ve been to Madrid if you haven’t been to the Royal Palace? It’s one of the most recognizable landmarks in the city. With over three thousand rooms, it is the largest functioning royal residence in Europe, and dwarfs Buckingham Palace in size. I didn’t bother booking a visit inside, because I knew it would take at least a day to fully appreciate its grandeur.

I was fortunate to get to the Buen Retiro Gardens just before sundown, which gave it an almost ethereal quality. If you’re short on time, it’s important to know which parts of the park to visit before visiting, because it is quite huge. Not Central Park huge, but still, huge. I went primarily for the Crystal Palace, built for the Philippine Exposition of 1887, and by happy chance stumbled onto the monument to Alfonso XII just as the sun was about to set. Bathed in the shadows of dusk and the last gasp of a setting sun, it was a delight.

If you ever do find yourself in Madrid, do go for the not-so-secret secret nun cookies. Baked by the cloistered sisters of the Monasterio del Corpus Christi, getting your hands on these can be quite an adventure. It involves navigating a few confusing back streets, finding the right door, and knowing what to ask for – a particularly difficult feat since the nuns of this monastery do not interact with the outside world. We lucked out when we followed this one guy who seemed to be creating his own documentary, because he knew how to speak Spanish and helped with the buying process (that’s him in the .gif!). When ordering the cookies, one has to place the money in a sort of blocked out lazy susan that spins, without you seeing the person giving you the order. When it spins back around, your money is gone, replaced by cookies, and then it spins one more time (if needed) to give you your change. It feels deliciously illicit. Tom of Boingboing has a great how-to guide, if you ever want to undertake it yourself.

The hotel I stayed at was just off the Gran Via near the Puerta del Sol, just up the street from the Doña Manolita lottery. The line-up was insane. Insane. It’s the only word I can use to describe it, the photo doesn’t even show half of the line-up, which stretched around the block. I didn’t know why this little lottery place was so hot, people were willing to stand in the rain and cold just to get themselves a ticket, but this piece on The Local explained it all. It’s considered a Spanish tradition to take part in the El Gordo (The Fat One) Lottery come Christmastime, and Doña Manolita’s branch is famous for selling tickets that eventually turn out to be the winning ones!

I told the bestie I was treating this trip as an all-you-can-eat buffet, attempting to absorb as much of Spain as I could in a very limited amount of time. I know, I know. It’s an exercise in futility, because there is so much of it to absorb and there was no way a week would enough to try to hold all of it in. But I tried, anyway. And I don’t regret it. In Madrid, I felt like that bear in their coat of arms. I knew the strawberry tree held an immense amount of riches, and was only able to enjoy a few. But that is how it sometimes is, and I am thankful I got to enjoy it at all.

* not kidding about the cigarettes/cigarillos/cigars – it took me a few days to get used to how prevalent smoking is in Spain (I later found out 1 in 3 people smoke). Madrid made my head spin, and not always in a good way!