I wish I was one of those people who stayed attractive even when fat. Curves in the right places, a tiny face. But nope. We’re talking Judy Ann at her worst. And it sucks.

It sucks when Halloween comes around. On one of the very rare instances when wearing costumes in public is socially acceptable, sometimes it feels like the go-to costume is a variation on a sexy professional. Sexy nurse. Sexy firefighter. Sexy maid. Sexy nun. Sexy zombie. It wouldn’t do to just be professional, it has to be sexy because it isn’t Halloween unless your ass cheeks are hanging out.

Hallow – J.K. Rowling aside – means holy, and the hallow in Halloween has long passed its sell-by date. There’s nothing sacred about running around in stilettos, wearing thigh-high fishnets and a sexy nun costume but hey, we’re only young once. I’m not hating. Between you and me, that Halloween would totally be my Halloween if I weighed at least twenty pounds less and had a waist.  But it isn’t. So I end up looking like this. 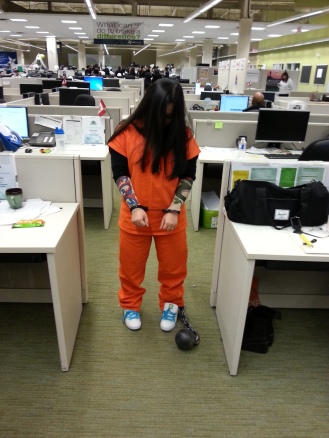 I’d decided if I couldn’t have my ass cheeks hanging out, I could at least make a statement, the statement being work sometimes feels like a penal colony so I felt like dressing the part. Which apparently made an impact, because the next year they decided to have a theme, and the theme was… 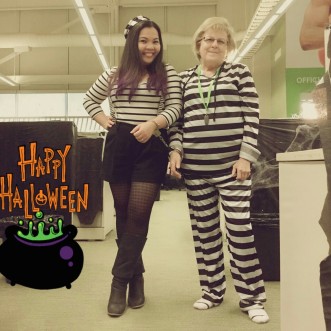 Caged heat. I mean jail. Or inmates. Or something. I bit the bullet, upgraded my handcuffs and went as an inmate once more, albeit a borderline attractive one this time because my middle name is Mary and I’m quite contrary. (No it isn’t.) No exposed ass cheeks, much to your relief. My face looks supremely weird in that photo and I was obviously too cheap to go all in and buy an actual costume, but eh. Let it go.

This prison theme is an unwitting favourite of mine. I once spent the night at the HI Ottawa Jail Hostel. The former Carleton County Gaol, once considered a model penitentiary in the 1800s, they’d conscripted the cells into really cozy little rooms with bunk beds, which I thought was a hoot and a half.

They were nice enough to include a guided tour of the jail for the guests the next day, leading us to the top floor – which had been Death Row – showing us the gallows with the working trapdoor, taking us all the way to the basement to solitary. I later found out that apparitions sometimes appear at the foot of guest’s beds, that the backyard – now a bar called Mugshots – was an unmarked grave site, and that there have been reports of lonely cries echoing through the dorms. All I’d wanted was to say I got to spend the night in jail, and unwittingly ended up in a building ranked just behind Chernobyl on the list of the world’s scariest places. The trick to trying the unknown? Don’t research too hard.

Dressing up, trick-or-treating and hoarding bags of candy is awesome, but I still prefer the way we Filipinos celebrate the dead. Picnics at the cemetery, One Sweet Day on repeat, the party taken straight to where our loved ones are interred? It’s awesome. Plus, we get a bit judgy.

“That headstone has weeds. No one’s come to visit.”

Then everyone goes back to communal eating, drinking, singing really bad karaoke and playing mahjongg o and whatnot. The whole thing is macabre, hilarious, bittersweet and a great way to celebrate the dead. Free candy and exposed ass cheeks are fun, but the Day of the Dead is about focusing on the ones we love who’ve since departed and in my opinion, the way we do it is still the best.

One thought on “Night of the Living Undead”